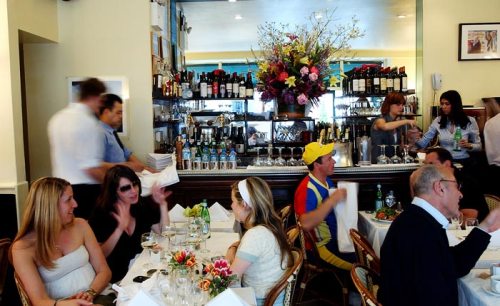 [food coma (n): the feeling of listlessness, bordering on sleep, that one feels after eating a large meal, often caused by a rush of blood to the stomach and intestines during food digestion.]

Ohh Le Bilboquet…There is just so much to say about this tiny French Bistro, which is packed with a big French attitude.  We all know that a certain level of animosity exists between the French and, as they would say, “Filthy Americans,” but Le Bilboquet proves that you don’t have to be in France to experience it!  The wait staff (all French…of course) are a group of beautiful (and arrogant) young men, who seem inconvenienced that they even have to take your order.  Essentially, you have to call them over for everything and this past time my boyfriend even caught himself saying, “Excuse me sir, can we place our order?”  That’s right, the customer asking the waiter if they can be served!!! A little backwards, no? Of course the supermodel looking man then put down his Sunday paper and came out from behind the bar to take our order, but it just feels weird.  Ohh and if you have questions about the menu, which of course is all in French, don’t expect much help from the wait staff…I asked if they had tuna tartar and he was like “of course, don’t you see it right here on the menu?!” (pointing to something in French, while making me feel uncultured at the same time).

At this point, you’re probably thinking that I messed up my star rating because all that I have done is complain…but Le Bilboquet does in fact deserve five stars because the FOOD IS INCREDIBLE!  The reality is that this place would not be packed with American patrons if it did not serve delicious food.  I always order the Cajun Chicken, which is actually orgasmic.  It is served in a delicious peppery butter sauce and is sliced down into small pieces, making it easy to eat.  Ohh and there are no bones, which is a major plus in my opinion. It is served with a small mixed green salad dressed with balsamic vinaigrette and some of the most amazing french fries I have ever tasted.  The fries at the bottom of the pile soak up some of the buttery Cajun sauce and WOW, eating those is an experience!  I have also had the ceasar salad, which is very delicious.  However, the Cajun Chicken is a must have and even better, it is a huge portion!!

So, if you walk into this place and find yourself annoyed by the arrogant wait staff and the difficult to read menu, DON’T LEAVE!!  Just order the Poulet Cajun and I promise you won’t even be able to put down your fork to complain.  When the food comes at Le Bilboquet, the table (no matter what size) goes quiet until everyone has finished their plates.  Then to pull yourself out of the inevitable food coma, order a cappuccino or espresso (the cappuccino is amazing!!) and resume your table talk.

The prices are high (Cajun Chicken is $27), but the food quality can demand such a price in my opinion.

I have only ever been to Le Bilboquet for lunch, and the crowd ranges from youthful to elderly.  Lots of people getting dropped off in character town cars and as New York Magazine says, tons of “trust fund women with their little dogs.”  However, I have heard that the dinner scene is quite different and much more youthful because the restaurant plays loud “club music,” which makes conversations difficult. I’m young and that doesn’t appeal to me, so I will probably stick to lunches there!