I am the kind of foodie that seeks out hole in the wall restaurants,  loves eating sketchy street foods, and believes that you can get 5-star quality food from a truck. That being said, I also do occasionally enjoy going to hyped up,  “mega restaurants” in the city to determine whether or not they are really as overrated as the NY Times critics claim.  This past weekend I went to Ilili, where chef-owner Philippe Massoud is combining traditional Middle Eastern and modern Mediterranean flavors to create inspired and upscale Lebanese dishes. The atmosphere is nothing short of grandiose with seating for over 300 people, in a bi-level restaurant space that is broken up into multiple cozy lounges and dining nooks.

My friend Liz and I took our seats in one of these little cubbyholes and began to salivate while reading over the menu. I asked our waitress to recommend the best three dishes on the menu, and without an hesitation at all she replied, “the Chankleesh, the brussel sprouts, and the Ilili candybar dessert.”Her confidence was convincing so we got started with an order of the Chankleesh, which is a creamy feta cheese combined with ripe tomatoes, onions, olive oil, and za’atar spices ($10). It sounds simple and it is, but every single ingredient is top  notch quality and each flavor is perfectly balanced. It was also the first dish to arrive at the table and in my starving state, it was anxiously anticipated and quickly scarfed down. I used the warm and pillowy soft pita to pick up the bits and pieces and tomato that remained on the plate and soak up the remaining oil and za’atar spices. 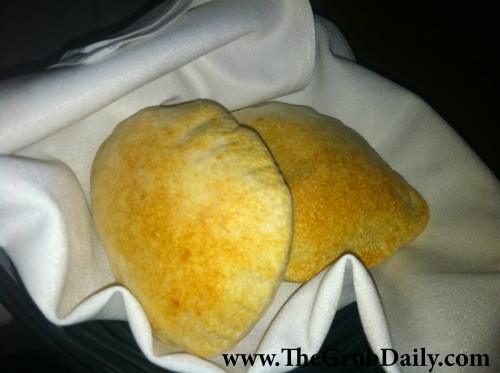 Finally our cocktails arrived. I ordered the From Beirut with Passion, which is a basil cilantro mint infused vodka with sparkling passion fruit juice. It is served on the rocks and it is the perfect blend of herbal and sweet, without being too fruity.

I preferred it to Liz’s Poison Sumac Margarita with tequila, orange liquor, pomegranate juice, and lime.

Next to arrive at the table were the Brussel Sprouts with grapes, fig jam, walnuts, and minted yogurt ($14). Almost every table in our nook had an order of these, and I totally understood why after my first forkful–they are the absolute BEST!!  A unique combination of flavors that transform an basic every day veggie into a over the top Lebanese comfort food. So rich and delicious. In fact, chef Massoud posted the recipe on the website (click here for the link!)

Liz is into shrimp so we also split an order of the Black Iron Shrimp with jalapeño, garlic, and cilantro ($15). I thought the shrimp were a bit tough, and would probably opt for a different appetizer next time, as they were nothing special in comparison to rest of our meal.

For the main entree we shared the Mixed Grill Meat plate for two ($64). We figured this would be the best way sample a variety of meats on the menu, exposing us to the greatest amount of Lebanese classics. The meat plate included chicken shish taouk, kofta lamb kebabs, and lamb chops along with a side of ratatouille and a garlic whip trio, which is a heavenly emulsion of oil and herbs.

My favorite meat on the plate was by far the lamb kofta which is basically a Lebanese meatball that is rolled into the shape of a sausage link.  The word kofta is derived from the Persian word ‘Kufteh’ meaning mashed, which represents the ground meat (oftentimes lamb) that is then mixed with cumin, coriander, parsley, mint, onion, and garlic. I ate a lot of kofta while traveling in Croatia and these were just as authentic and delicious as I can remember.

The lamb chop was cooked to perfection and seasoned straight through. I was cleaning the bone shamelessly, holding the chop between my two fingers. The chicken was juicy and tender but not nearly as flavorful as either of the lamb dishes.

Despite my feelings of overwhelming fullness (let’s face it, none of these dishes were light), I had embarked on gluttonous journey that would not be complete without dessert…..and two of them!
We ordered the Ilili Candybar3, which is a chocolate lovers dream plate consisting of rich chocolate ganache, a chocolate Lebanese ice cream with hints of caramel and fig, and a white chocolate sesame sauce with crumbles of pistachio ($12).

Ilili is known for this dessert and chocoholic Liz looked like she was having an out of body experience with each bite, but I seemed to prefer the Labne Cheesecakes which were rich, smooth, and creamy ($10).

Overall the meal was one of the best dining experiences of my life from the food to the atmosphere to the service. The service is impeccable by the way. The wait staff knows the menu inside and out, which is incredibly important at ethnic restaurants, and they can help any indecisive dinner arrive at a good ordering decision. Your water glass will never go empty an the delicious pita basket will be refilled continuously throughout the meal. I had no expectations for Ilili because I really hadn’t read any reviews prior to my meal there (very unusual for me….as I normally like to get acquainted with menu pages and yelp reviews before I dine somewhere new), but I left feeling justified with every penny spent. A perfect meal at a reasonable price. I cannot wait to go back!