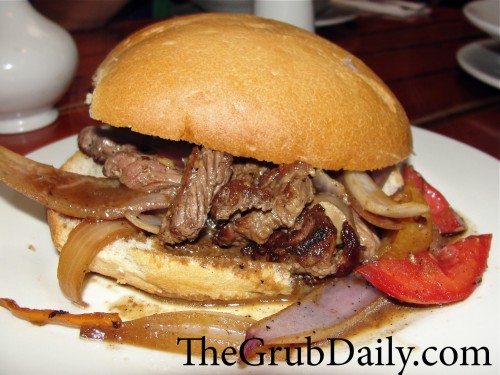 My friends and I decided that we would end our 6-month South American adventure with a bang, and do the Inca Trail to Machu Pichu before flying home for good. And given that the Inca Trail is a rigorous 4-day, 50 km trek, reaching a height of 4,200 meters (I was not aware of any of these “minor” details before paying my deposit), I had an excuse to eat whatever I wanted while staying in Cuzco the couple of days beforehand. I needed to bulk up before this climb….and I certainly did!

Peruvian food is one of my favorite types of cuisine because it has such a wide variety of national dishes ranging from soups, to fish, to poultry, and even llama and alpaca meats! Below is a collection of photos, documenting my most memorable meals:

Lomo Salteado  – Lomo Salteado is a traditional Peruvian dish with Asian influence that can be found everywhere. It is strips of sirloin steak marinated in vinegar and soy sauce, that is then stir fried with red onion, parsley, and tomato. It is usually served alongside rice (image #2), atop french fries, or on a sandwich (image #1).

Dieta de Pollo – The quint essential comfort food, dieta de pollo is a delicate chicken noodle soup. I ate a bowl of this stuff before almost every meal, and I found that most Peruvians eat a bowl of soup before their entree as well–a soup society…I like that! 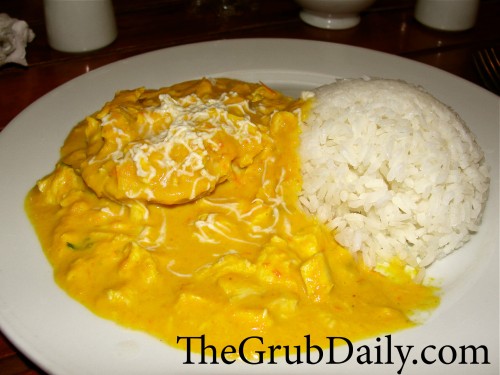 Aji de Gallina – Another classic Peruvian dish with a surprisingly French influence! French chefs, put out of employment by the social upheaval of the French Revolution, traveled to the New World and settled in Peru, creating a cuisine that blended local Peruvian flavors with French styles and techniques. Aji de Gallina consists of shredded chicken in a spicy cream sauce, flavored with cheese, garlic, nuts, and rocoto peppers (spicy Peruvian peppers). It is normally served with white rice and/or french fries.

Rocoto Relleno – As I mentioned before, Rocoto is a very spicy Peruvian pepper. Therefore, when you break down the Spanish name, a rococo relleno is a Peruvian stuffed pepper…a very spicy one at that! This particular dish originates in the city of Arequipa, but is now served all over the country! It is can be filled with beef, vegetables, and cheese, among many other things. The one in the photo above is even deep fried! 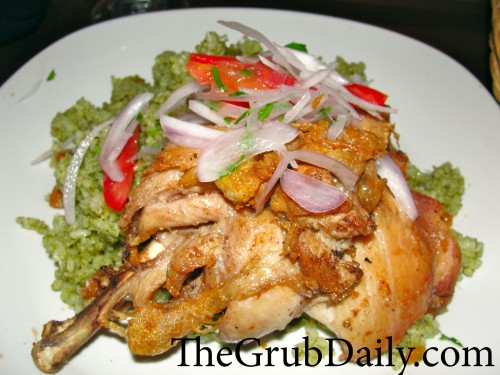 Pollo con Arroz – Chicken and rice has never tasted so good!! Peruvians know how to prepare a chicken that literally melts off the bone and the cilantro flavored rice that accompanies the poultry is out of this world!! The raw onion and tomato garnishes add a fresh crisp texture to the hearty dish. 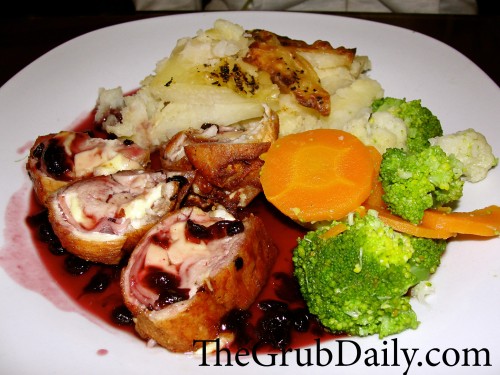 Pollo Relleno con Alpaca in Elderberry Sauce – This was our way of easing into trying alpaca. We weren’t going to order an alpaca fillet outright, so we tried a chicken dish that was stuffed with bits of alpaca first. The dish was then finished in an elderberry reduction (elderberry being very popular in Peru), and then accompanied by sautéed vegetables. What does alpaca taste like, you ask? Chicken. Go figure!

Pisco Sour – When in Peru, have a Pisco or two!! Pisco Sour is a popular Peruvian cocktail that dates back to about 1900, getting is name from the Quechua word Pisco, meaning bird. The drink is made from Peruvian grape brandy (pisco), lime juice, syrup, ice, egg white, and Angostura bitters. It is mixed in a blender so it comes out frothy and full of citrus flavor.

Assortment of Causas – With over 8,000 species of potatoes native to the Andean region, it is no surprise that Peruvians use a lot of them in their cooking. A causa, in its most basic form, is a mashed yellow potato dumpling mixed with lime, onion, chili, and oil. The potato mixture is then stuffed with any combination of avocado, chicken, canned tuna, and shellfish. We decided to try the seafood sampler version, and it was light and lovely. 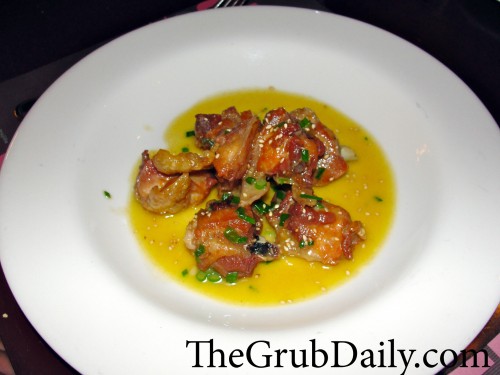 Chicharron de Pollo – Chicharron normally refers to a dish containing pork rinds, but since that didn’t particularly appeal to me, we decided to order the chicken version of the dish instead, which tasted like good ole’ American fried chicken. The fried chicken thighs were then finished with a garlic, ginger, and panda chili sauce, which was out of this world (and every ounce fattening!). 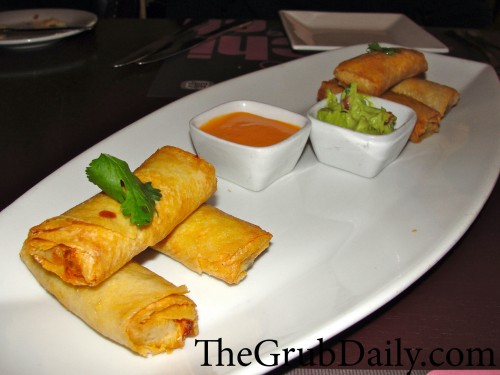 Peruvian Tequenos – Tequenos are not really Peruvian by nature, but these were because they were filled with lomo salted and aji de gallina. Anything stuffed and then deep fried is generally delicious, and this was no exception. I particularly loved the spicy rocoto dipping sauce that accompanied the tasty appetizer. 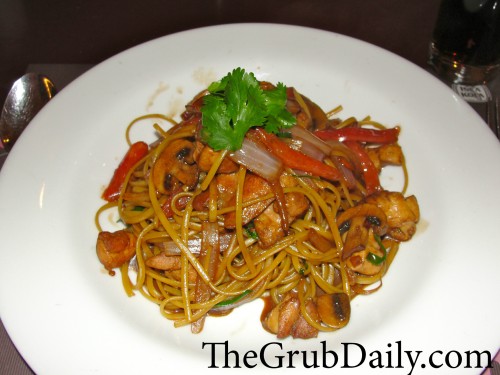 Tallerines Saltados con Pollo – If you have ever been to Peru, you will have noticed the incredible amount of Asian (chifa) influence on the food there. This is because the Spanish brought Chinese slaves to the country and with them they brought their national cuisine. One of the very popular Asian inspired dishes is Tallerines Saltadas, which are essentially lo mein noodles with poultry or beef (poultry in the photo above!). 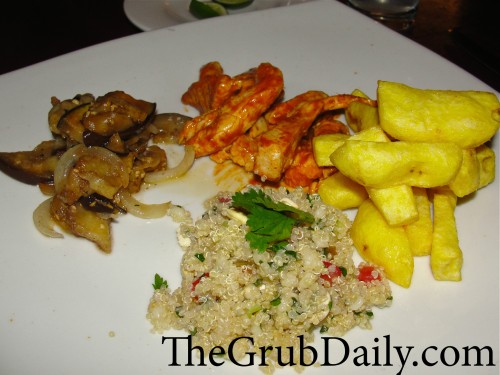 Pollo en Salsa Rocoto with Quinoa Tabouli – This was supposed to be served as a sandwich, but since the restaurant ran out of bread, I ordered it as a deconstructed plate of ingredients. The elements included: chicken sautéed in a spicy rocoto pepper sauce, sautéed eggplant and caramelized onions, quinoa tabouli salad, and french fries. The platter had an awesome mix of Peruvian, Asian, and Middle Eastern flavors.

Alfajors – Alfajors are shortbread cookies filled with dulce de leche spread (a.k.a caramel). They are popular all over South America, but prepared slightly different by every country. For example, Argentina coast them with chocolate, Chileans in Patagonia fill them with berry flavored jams, and Peruvians simply serve theirs with a dusting of powdered sugar. We got this plate of petite alfajors and fruit jams complimentary with our bill at Chi Cha de Gaston Acurio, and we all agreed that they were the best alfajors we had on our trip (sorry Argentina….)

Woman selling her herbs and spices. 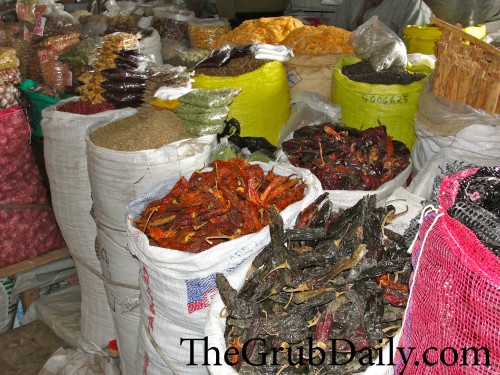 Enormous loaves of bread, which can be found everywhere in Peru.

The line up of fresh juice bar stands. 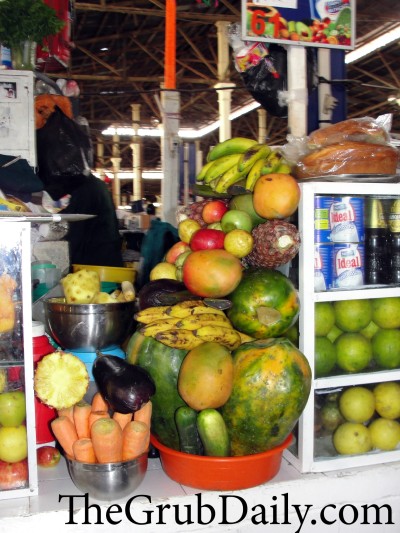 Sam pulls up a chair and tries a juice. Have it at the stand though, because if you ask for it to go they give you a plastic bag with a straw:

To-Go cups are so American.

Where the Peruvian locals go to eat. 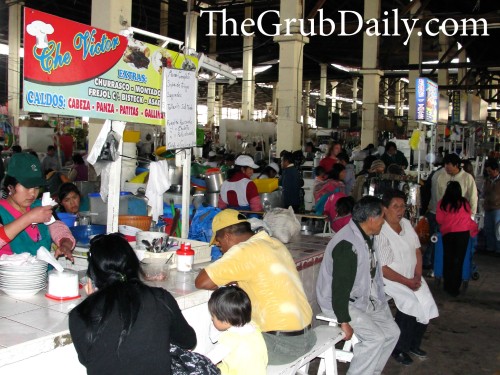 There are an infinite number of cute sidewalk cafes and restuarants in Buenos Aires. There are little vegetarian spots, tea houses, ice cream parlors, and even places strictly devoted to the sale of coffee and chocolates. The task of choosing just which one to spend your afternoon at can be quite overwhelming, especially in the crowded Palermo area. As I was walking to the gym the other day, I passed by at least 18 adorable cafes, each one begging me to abandon my work out plans and indulge in something delicious and homemade. I tried to fight the urge, but finally caved when I passed by bBlue Natural foods. I could see the salads being served in enormous porclain bowls and almost every table had a brightly colored fruit smoothie on it. I couldn’t resist. 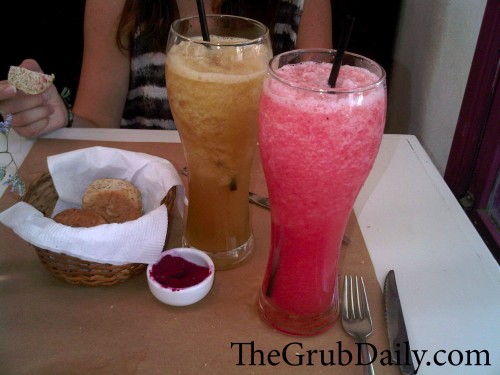 I took a seat and ordered the b-Pollo Salad, which is a bed of mixed greens with shredded chicken marinated in honey, soy sauce, and dijon mustard, topped with sundried tomatoes, portobello mushrooms, carmaleized onions, and croutons, and tossed with your choice of dressing (39 pesos). Personally, I like the bBlue house dressing with olive oil, vinegar, blueberries, lemon, honey, and mustard. It adds a sweet fruity flavor to the salad, which is a nice contrast with the sundried tomatoes. So far, this place serves the best salad in Buenos Aires (in my opinion, of course!). The portions are huge and they aren’t stingy with the meats or the cheeses. Also, the ingredients are incredibly fresh and absolutely everything is homemade. Ohh and finally a place that serves a non-mayonnaise dressing!! Major brownie points for that!

Since my first time at bBlue, I have become a regular and I have yet to have a bad meal. Another favorite salad of mine is the b-Deli Salad, which is a bed of baby spinach, lemon-marinated mushrooms, cubes of brie cheese, and toasted almonds, tossed with your choice of dressing (39 pesos) (I like to put the homemade pear dressing on this salad).

In addition to the salads, bBlue also makes incredible gourmet sandwiches!! They have all sorts of spreadable cheeses and aiolis, so the sandwich isn’t dry. My personal favorite so far is the Pollo Sandwich served on French bread with chicken marinated in honey and soy sauce, sliced tomatoes, caramelized onions, portobello mushrooms, melted gruyere cheese, with dijon and mayo (38 pesos). The sandwich is then served with side of incredible herb roasted potatoes and a ramekin of ketchup. The picture really doesn’t do it justice, but imagine a gourmet chicken cheesesteak, and that’s this sandwich.

Ohh, and I almost forgot….the POMEDLADO!!!! It’s like a lemonade, but one hundred times better becasue it is made with grapefruit juice, honey, fresh ginger, and a hint of mint (13 pesos). Seriously? It redefines refreshment.