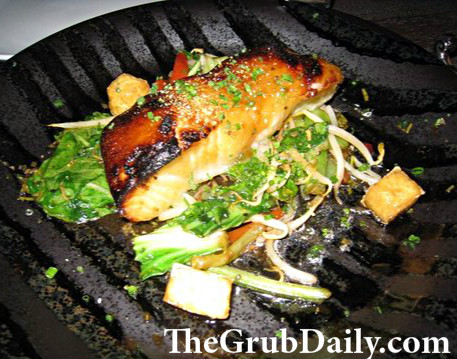 Last month, I went out to Las Vegas for a couple of days to scope out the Pizza & Craft Beer Expo at the Las Vegas Convention Center for work (very, very hard work, might I add!). Basically, I spent two full days just sampling different specialty beers and cheeses, followed by two long nights of fine wine and good food.

Out of all the restaurants in Vegas, Tao was one in particular that I wanted to try and it just so happened to be conveniently located in the lobby of my hotel. After reading several yelper’s comments, I found that most considered Tao to be a restaurant serving very small plates of food at an extremely high price, which they considered unjustifiable. But I think when food is extraordinary and unforgettable, then to hell with portion size and if you can afford it, to hell with the price. So was Tao worth the splurge for a special indulgence? Continue reading to find out!

To start we ordered the Spicy Tuna Tartar served on Fried Rice Cakes ($18). I am used to eating tartar with something extremely crunchy to to counteract the raw texture, like a fried plantain chip, or a wonton,  so I was hesitant whether or not I would enjoy the fried rice accompaniment, but it worked perfectly with the fish. It didn’t seem too mushy and the flavors were so on point, complimented by the spicy cream sauce that was drizzled on the bottom of the plate. I was scraping this stuff up with my fork it was so good.

I also wanted to order two classic Asian appetizers so that I could accurately assess the food, comparing it with dishes that I was already familiar with at other Asian restaurants. So we got an order of the Satay of Chilean Sea Bass with Wok Roasted Asparagus ($19).

The fish was cooked to perfection and the satay sauce was served in just the right portion—not too heavy and not too light. Although, I tend to prefer chicken satay and would like to try that next time. 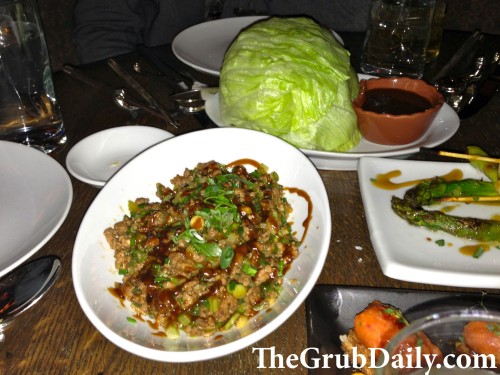 We also tried an order of the Squab Lettuce Wraps ($15), which peaked my interest because how often do you see squab on the menu?!? They were delicious and came with a huge portion of grilled meat. In fact, we had to ask for more lettuce shells to use it all up. This was a great bang for your buck if you’re on a budget.

As far as entrees were concerned, we contemplated ordering a bunch for the table and sharing, but there was really only one dish that I wanted to try—the infamous Miso Glazed Chilean Sea Bass ($39). Google anything on Tao and this is sure to be mentioned at some point in the article; they are known for this signature dish. So I convinced everyone to order their own dish and had zero regrets because my sea bass was unforgettable.

It was the kind of dish that easily commands the price and gives me a season to visit Tao at some point in the future (the very near future, I hope!).  The fish was like butter, just falling apart with each poke of my fork.  And the sauce, which was more like a delicate broth, was unique in flavor, without too much saltiness (contrary to many blogger opinions). I also enjoyed the sautéed vegetable medley underneath the protein, which bathed in the broth, soaking up the miso flavors.

The other dish that really stood out for me among the six entrees, was the Wasabi encrusted Filet Mignon, served with a stack of tower of Tempura Onion Rings ($40).

This was a smaller portion—as filets tend to be—but it was also incredible and unlike any other steak seasoning that I have tried. The wasabi added a nice heat to the exterior of the beef and the temperature on the cooking was just right. I am not a huge fried onion fan, so I would have preferred an alternate side dish, but A+ on the steak.

Other dishes ordered included the Diver Sea Scallops with Red Curry and Thai Basil ($35), which were very fresh and soft in texture. I liked these a lot, but would probably order them as an appetizer to share rather than an entrée. 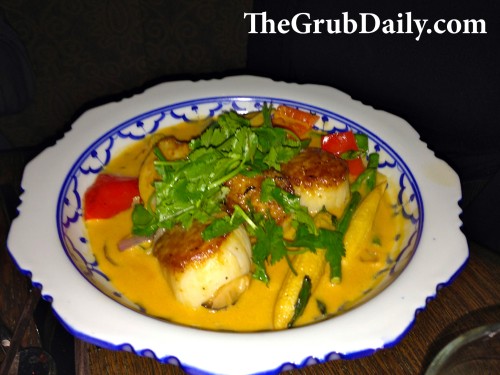 The Roasted Thai Buddha Chicken ­­­($28) was good but nothing terribly special. Wouldn’t suggest it. 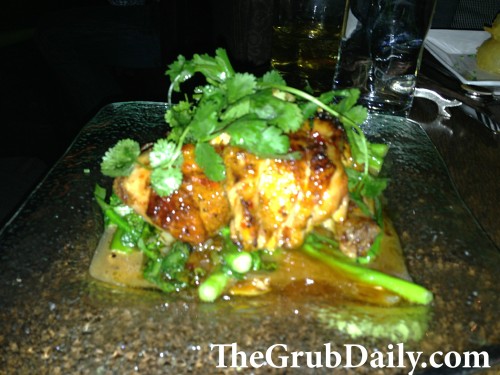 We also had an order of the Vegetable Fried Rice ($13) a with rich fried egg on top, which was amazing. Put a fried egg on just about anything and count me in. Had a nice thick soy glaze drizzled over the dish and comfortably fed six people as a side dish.

Overall, I walked away from Tao a very happy camper and would definitely be back for more of that Miso Glazed Chilean Sea Bass. I will admit though that some of the dishes were just average and if I hadn’t ordered some of the more spectacular ones (the steak, the sea bass, and the tuna tartar) then I would have left feeling….well….duped. My advice is to read the reviews on Tao (you’re doing a good job if your reading this now!) and then order the dishes that people and critics like myself recommend as fabulous, even if it means stepping out of your comfort zone a little. To be honest, I’ve only ever had sea bass one other time and I was totally nervous about committing to the dish at the cost of  $40, but it was what they are known for and now I understand why.

Go to Tao if you’ve played a good night in Vegas and have some money to throw around on a good meal.