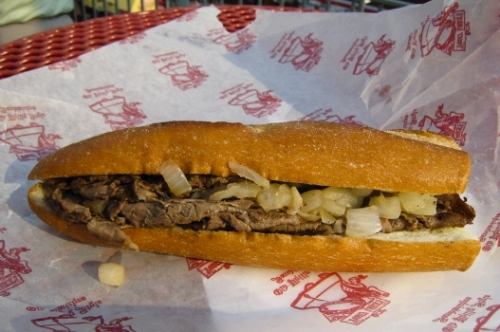 Whenever I tell someone that I am from Philly, they inevitably ask me the question, “Pat’s or Geno’s?” It’s been a highly publicized cheesesteak rivalry in South Philadelphia for about 40 years now. Here’s the history:

Pat Oliviere was dubbed the creator of the Philly cheeseteak back in 1933, serving his sandwiches in the Italian Market in South Philly until he opened up his own place called “Pat’s King of Steaks,” which is still open for business today. His original steak sandwiches were not served with cheese, but Joe “Cocky Joe” Lorenzo made the provolone addition a few years later, and thus the Philly cheesesteak was born! In 1966, Joey Vento sparked some competition and opened Geno’s Steaks directly across the street on the corner of 9th Street and Passyunk Ave. The biggest difference between Pat’s and Geno’s is that Pat’s chops the meat and Geno’s does not. But you can expect the same rough Philly attitude at both spots…whether you’re a local or not. You’ve got to order the right way, or you’ll be sent to the back of the line (which can get pretty long….so just practice you’re order and get it right the first time!). You say the ingredient first followed by “wit” or “witout.” For example, “whiz wit” (translation: with Cheez Whiz) or “onion witout” (translation: without onion).

The classic Philly cheesesteak is with onions and cheese whiz, but I find the heavily processed, fluorescent orange liquid offensive and stick to provolone (there is also the choice of American cheese too).

I am going to withhold any commentary on the Pat’s and Geno’s feud (which tends to be a bit of a tourist trap in my opinion) because I believe that Tony Luke’s is the real deal, serving the best cheesesteaks and roast pork Italian sandwiches in the city. Its a little glass-enclosed area underneath the I-95 overpass with an ordering window and picnic tables (make sure you bring your jacket and scarf in the winter because it gets cold out there!!). Its nothing fancy, but does good food have to be?!? 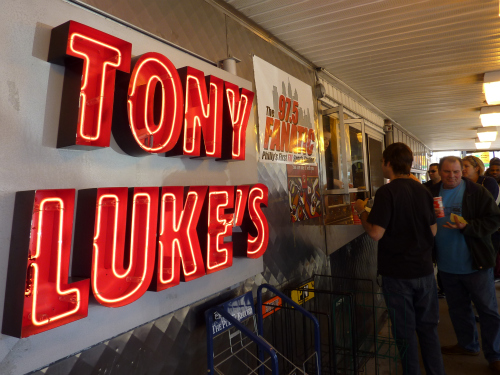 My dad and I stop to get a Tony Luke’s steak sanchwich on our drive home from the airport every time that I fly back from school. And we each get the same thing; Cheesesteak with sharp provolone, onions, sweet peppers, and mushrooms. It is juicy, greasy, meaty deliciousness!! I unwrap my sandwich as if it’s a present, rip it into two halves with my hands, and then savor every bite of tender meat and gooey cheese (which is always perfectly melted). There is nothing like a Tony Luke’s cheesesteak, I promise! Once you try one, you will never enjoy another steak sandwich again. Tony Luke’s is also famous for their Roast Pork Italian Sandwich with spicy roast pork, garlic infused broccoli rabe, sharp provolone, and drizzle of gravy. I have never had it, but apparently it’s so good that converts even the biggest cheesesteak fanatics into roast pork eaters.

Forget Pat’s, forget Geno’s, Tony Luke’s is where its at….even Adam Richman from Man V. Food knows that. Below is a clip from his episode at Tony Luke’s. Go for yourself though!