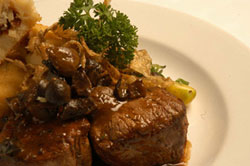 I am back in Miami for the week, celebrating my 1-year anniversary with my boyfriend, Roberto (the only thing in my life that I have managed to commit to), and he has been speaking my love language by taking me out for some incredible food while I’m here. Today, he told me that we were going to Novecento in Brickell to watch the Spain v. Portugal world cup game and of course, I got all sorts of excited to be included in the ethnic festivities, since soccer isn’t really as big of a sport here in America. So I put on my Spanish Saints bracelet, which somehow always makes me feel slightly more ethnic when going to places such as Novecento, and sure enough I found myself blending right in with the 200 something Spaniards who had gathered at the restaurant to watch the game. And as if my bracelet wasn’t enough to disguise my inner gringa, I even referred to soccer as futbol!!

But on to the food! For lunch I ordered the Milanga de Pollo (aka Chicken Milanese), which was very, very good. I believe that a Milanese should always be pounded to a ¼ of an inch thin, and this was so I was pleased. I had mine with a side of mixed greens and my boyfriend had his with a side of fries, which I ate half of and thought were delicious! My boyfriend’s brother, Juanmi, ordered the Pollo al Curry, which I thought was odd to appear on a Spanish menu but it both smelled and looked delicious (I would probably order that the next time I go to Novecento). Juanmi’s girlfriend, Lidi, ordered the smallChicken Caesar Salad (she’s a swimsuit model….I wish I could order that and be satisfied) and the chicken to lettuce ratio was way out of proportion—“Would you like some salad with that chicken?!?” If your trying to get your protein in then you’d probably love it, but if you just want a salad I wouldn’t suggest it.

So we have finished our food and Spain has just won the game against Portugal, much to everyone’s delight (they cheered so loud you would have though the won the whole world cup), and now we are ready for another meal. To celebrate the win we order a bottle of champagne, which was half price (not sure if it’s a daily special or just because of the game) and some more food—Ceviche Con Tostones (white fish ceviche marinated in lime juice, jalapenos, avocados, plantains, and fresh basil and served with tostones) and Entrana Con Chimichurri(grilled skirt steak with chimichurri sauce). I didn’t care to try the ceviche, but the chimichurri sauce for the steak was so delicious that I even dipped a couple fries in it!

Overall, Novecento serves good food and has a great atmosphere. In my opinion, it is a little over priced for the simplistic nature of the food (my lunch portion of Milanese was $13) but it is an enjoyable experience and a perfect place to watch the game.